On 20 January 2022, President Uhuru Kenyatta imposed a countrywide moratorium on the exporting, buying or selling of scrap material. The blanket ban was precipitated by the blatant vandalism of angle towers supporting a high voltage transmission power line connecting Nairobi to the Kiambere hydroelectric dam. Cross beams on the basement of the angle towers had been removed resulting in the towers collapsing and plunging the country into darkness.

The ban was to stay in place until after the government devised sufficient measures to effectively police the scrap metal trade. For four months, scrap metal dealers remained at an impasse until 26 April when the Ministry of Industrialization, Trade and Enterprise Development announced the partial lifting of the directive. In between, scrappers at the bottom of the food chain and traders commanding the chain were subjected to a life of despair, reduced to making pleas to the president through the press.

Before the fateful day in January when the state came down heavily on scrappers, the topography of the scrap yard at Ha Kairu, a few metres away from Kenyatta University’s Ruiru Campus, was different. What are now piles of plastic were mainly steel, aluminium, corrugated sheets, and other types of scrap metal.

On a visit to the landfill in March, I find men dressed in scruffy, dirty-looking dark blue dust coats ploughing through large heaps of trash, mainly plastics and old carton boxes. The men work furiously, sorting out the trash into different heaps of plastic, glass, and paper. 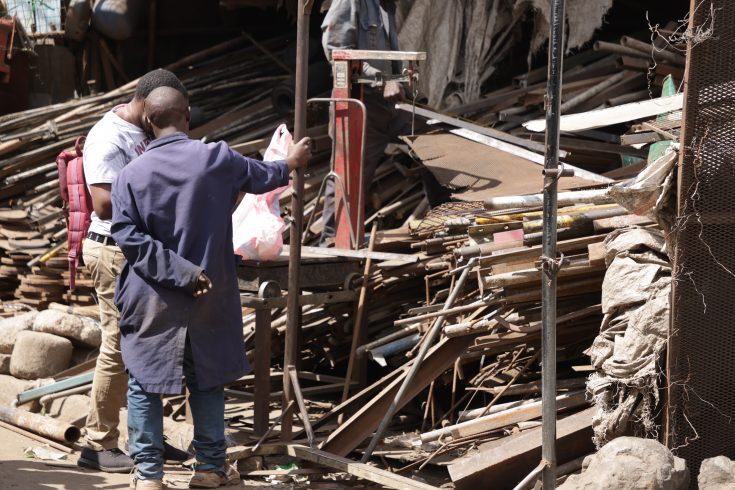 Another group of young men wait with gunny sacks ready to pack the already sorted plastics. The men then hand out the packed sacks to yet another man, who then brings the sacks to a weighing platform situated in the middle of the yard. Here, a lady with a pen and paper records the weight of the sack and its contents and hands them back to the men. The seamlessly choreographed coordination is a sight to behold.

“Mumejaza maji kweli?” manning the weighing platform says out loud. The men laugh, and one jokingly tells her, ‘‘Si mingi sana.’’ This soaking of carton pieces with water, I later found out, is a trick used to bulk up the cartons to cheat the scale and get in more kilos. More kilos means more money since pay is per kilo.

Finally, mustering up the courage, I approached the lady who by now we have established is in charge of the yard. I quickly flash out my work badge and state my reason for being there. A friend familiar with the terrain was chaperoning me around.

Careful not to cause any more trouble, we walk out of the yard. Following closely behind is the older woman, still talking. “Tumekwisha sisi. Wale wote tumetuma wametugeuka.” To make certain that we leave, the lady escorts us to a distance far away from the yard.

Soon after I am forced to leave the now declared no-go zone area, I make my way to Ngoingwa in Thika to meet another scrap metal dealer, Iregi, who buys scraps from itinerant scrap-metal collectors.

Iregi has been in the scrap metal business for more than 15 years. After completing his primary school education, Iregi never proceeded with his education, instead getting pushed by circumstance to get into employment. He stumbled upon the world of scrap metal, which became his source of livelihood to date.

Before setting up shop in Ngoingwa in 2019, Iregi was employed at a scrap metal yard within the Nairobi Central Business District. The yard dealt majorly with ferrous iron that the owner sold off to companies that smelt the iron which is then reused in the local building, construction and hardware sector. Iregi was however forced out of a job after the owner sold off the land where the yard stood. Since the scrap metal business, at least for a small trader, requires relatively little investment and labour costs for one who has already been in the industry and knows its workings, Iregi did not have a hard time getting back on his feet.

To start off, Iregi bought and sold corrugated sheets, pieces of steel collected as waste from construction sites, and any other metals his hunters and gatherers could lay their hands on. He would buy the metal between Ksh30 and Ksh40 for a kilo and pile it all up in his initial site, a small-sized room of about 15 square feet wide. Depending on the market rates, he would then resell the scrap metal to the mid-sized traders between Ksh45 and Ksh50 per kilo. He often got one buyer to buy off the entire pile, usually about three tonnes.

After the presidential decree against scrap metal dealerships, Iregi was forced to shift his business to collecting plastics and cardboard, which he bought at Ksh20 per kilo and resold at Ksh25. It goes without saying that of all the scrap materials, metals are by far the most valuable, which is why so many entrepreneurs like Iregi hunt for them instead of plastic or carton boxes.

Two of his friends in the same area closed shop as soon as the ban came into effect and have never reopened. Immediately after the ban was announced, the area chief and the police would conduct random searches to ensure he and others were not buying or selling scrap metals, Iregi tells me.

Back in October 2007, Kenya amended the Scrap Metal Act of 1959 abolishing the requirement for a licence for one to deal in scrap metal. As a result, the industry was buffeted by criminal elements who vandalise the country’s road furniture and public infrastructure, among other criminal interventions. Culprits cart away everything from street light poles, electricity and telephone cables, guard rails, manhole covers, fiber-optic cables, and rail bars. Many of these are raw ferrous scraps, easier to discard locally because of their low price-to-weight ratio.

Endeavoring to put a stop to the growing menace, in 2009 President Uhuru Kenyatta, then Finance Minister, outlawed the exporting of scrap aluminium, steel and copper wires and cables while presenting that year’s national budget. The move inspired the East Africa Community to institute a ban in August 2010 on the export of used automobile batteries, lead scrap, crude and refined lead, and all other forms of scrap metals to any country outside the region.

In June of 2013, Former Nairobi Governor Dr. Evans Kidero wanting to avert vandalism in Nairobi banned the trade of scrap metal within the county. He later rescinded the decision out of pressure from stakeholders within the sector.

Resolute in its watchful care, the government of Kenya signed into law the Scrap Metal Act in 2015.

Unfortunately, despite having the act in place, the scrap metal industry has generally remained a tough nut to crack. A press release in March 2020 by the Kenya Rural Roads Authority (KURA) revealed that in a span of three months over 40 street poles worth Ksh7 million were vandalised in Nairobi City County alone.

Not A Man’s World

As Iregi and I continue with our conversation, a white truck pulls up at the front of Iregi’s shop. A woman and the lorry driver jump out and walk towards us.

The lorry driver unlocks the door at the back and out jumps four men carrying large, worn-out gunny sacks. The men make their way into the shop and start sorting and packing the plastics in the sacks. They then drag the fully packed ones to the open space at the front of the shop. They do this for about 30 minutes until they clear the room. Iregi then unhooks the weighing scale from the beam holding it and carefully weighs each bag as the woman notes down the kilos. 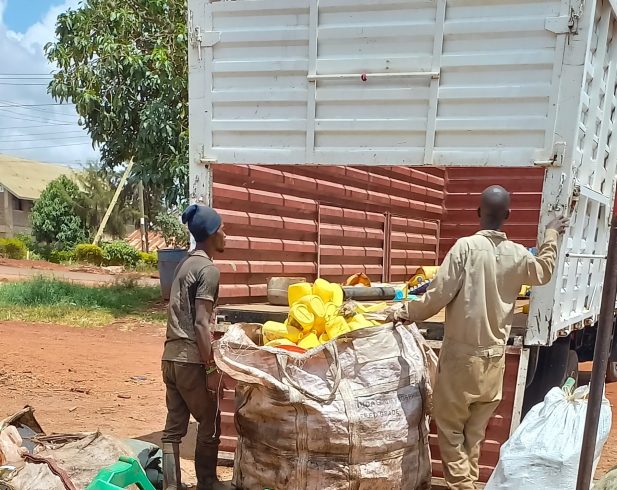 Men sorting and packing the plastics in sacks. Photo by Lilian Mutinda/Debunk Media

Wambui, who I get a chance to speak to, has bought and sold scrap metal for close to 10 years now. She owns a yard in Ruiru and collects scrap metal from small collectors like Iregi which she then resells to manufacturers who recycle the metals. Before the ban, Wambui had 60 employees but had to cut down to 15. The lorry being loaded with plastics was bought on loan and was only a few months old when the government struck. The bank was now on her case.

After months of waiting, the Industrialisation Cabinet Secretary Ms Betty Maina on 26 April presented the Scrap Metal Rules, 2022. The announcement partially lifting the freeze on trading of scrap metal however did not stir up the much-anticipated relief.

Instead, it has sent traders into further limbo.

All traders wishing to deal in scrap metal must obtain a licence for them to operate, failure to which they risk a fine not exceeding Ksh10 million for a first time offender or three years imprisonment. Repeat offenders face up to five years imprisonment or a fine not exceeding Ksh20 million. At the time the ban was announced, only 20 scrap metal dealers were licensed under the Scrap Metal Act. This is out of the approximately 700 dealers in the country.

The Start Up Math

Further, to weed out unscrupulous dealers, the licence applications will be subjected to vetting by multi-agency teams established in each county and chaired by respective County Commissioners.

In addition to the licences, collectors, agents, dealers, millers, smelters, transporters, steel fabricators, stockists of second-hand metal parts, motor vehicle salvage operators, electrical rewinders and local welding machines fabricators – all of whom the new rules target – will now be required to maintain and update records of their metal supplies and suppliers.

Moreover, while transporting any scrap metal, licensed dealers must carry a certified copy of their licences and that of the recipient of the scrap metal on vehicles used to ferry the goods, a catch-22 for traders who contract transporters only on a need basis.

Additionally, according to the new regulations only the government-owned Numerical Machining Complex and Kenya Shipyard Limited will be allowed to buy scrap metal disposed off from critical national infrastructure such as roads and railways, to be smelted into billets.

For the lucky few like Wambui and Iregi, embracing the world of plastics ensured they survived to tell their tales. But now they have to face new hurdles with the new regulations. Entrepreneurs turned survivalists, surviving not only on the detritus of society but against the unrelenting big brother with a big stick, or is it a metal rod that can’t be snatched and smelted?

A spot check in Kamukunji’s Jua Kali Market on 10 May, ten days after the scrap metal ban was lifted and the situation is still grim. The lifting of the ban appears to be mere a band-aid on a gushing wound, as many traders are yet to return to work. The few that have complied and paid the stipulated licence fees await vetting. For now, all they can hope for is that it will be back to business as usual sooner than later. 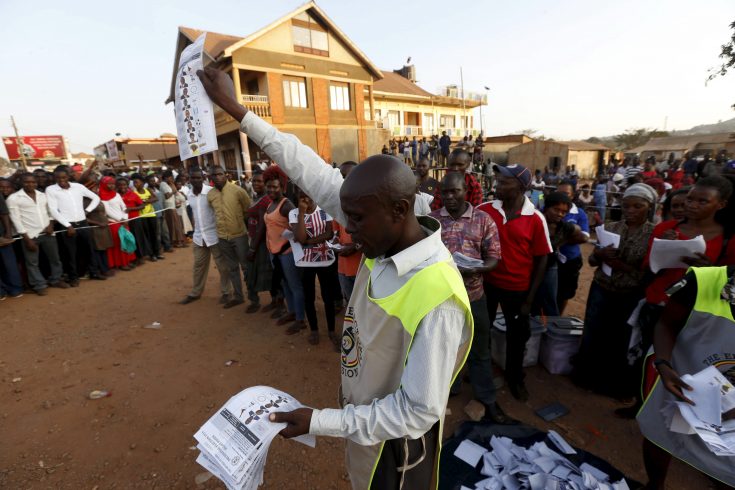 Bayana maintains that Nema has become too hasty and radical in its approach. He tells me that the deadline issued demonstrates a government whose priorities are reversed. Unsettling a whole community’s economy, he explains, will ...