It is 2.30 p.m. in summertime Nairobi and my fit-self is drenched in a thin sweat. Worse still, I am thirsty (for water, not that other stuff).  “So for this house, we will give you two 1000 litre jerricans,” that’s Cathleen, the housing agent’s (I’m told I can’t yet refer to her as a realtor, unless I venture into the leafier suburbs) opening line.

We are in Highrise Estate, erstwhile known as Nyayo Highrise, named after the “Nyayo” moniker of the then President Daniel arap Moi, part of a slum-upgrading project in the 1990s. Here, the older one bedroom rentals start at KES 16,000 per month, with the newer units at Seefar Apartments, occupying the space between the old Highrise and Nairobi River, costing between KSh 20,000 and KSh 25,000. “Water comes only on Fridays and Saturdays.” Boom!

Being a hot-blooded twenty-something-year-old, it is more likely that you’ll find John Calvin in a Catholic church than find me at home on a Friday night. If you are very lucky, you could chance upon me on Saturday morning, but even so I will probably be hungover after a night of whiling away the fast-fading scents of the roses of my youth. Keeping vigil at my faucet on Fridays and Saturdays ati to fetch water isn’t exactly my idea of an ideal weekend.

And yet the jerrican-syndrome is a familiar site in Nairobi, and not just in the sprawling Eastlands where I lived after campus. I stayed in the infamous Pipeline Estate, aka Pipu, that place where Breeder LW raps in Kalale: “Na usiache ndula nje na tuko Pipu…” Even so, we had water three times a week. Monday, Wednesday, and Friday. I had several 20-litre jerricans on my verandah, turning an otherwise okay-looking balcony into a quasi-warehouse. It was rich that I lived in ‘Pipeline’ yet I hardly had water. 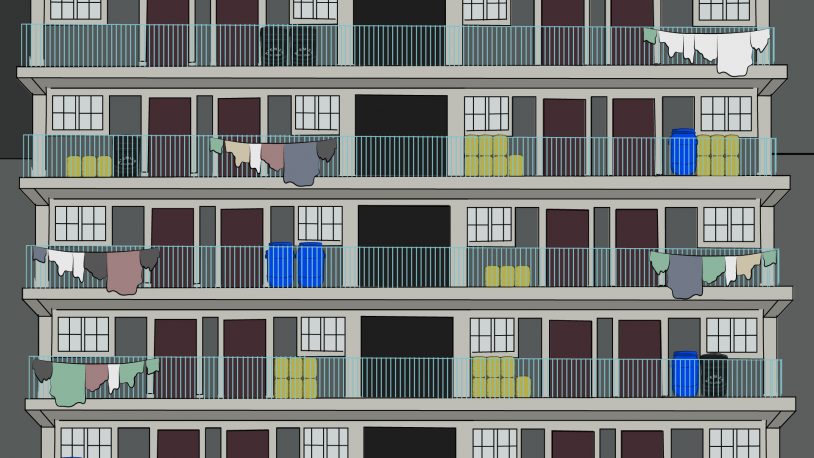 An apartment complex with jerricans and water tanks on balconies. Illustration by Capu Toons/Debunk Media

It is those Pipu memories that make me abandon Highrise with its Friday and Saturday water jamborees. I cast my net further, up Mbagathi Way (now Raila Odinga Road). I turn off into Kenyatta Market and into Ngumo Estate, three bedroom mansionettes with a Buru Buru-esque feel to them. Here, I learn, the water problem persists unless one has special arrangements, whatever that means. Maybe I should look elsewhere.

I decide not to give Cathleen more grief, and so I feign a postponement of the search. I am not really abandoning the search but I concede that my good agent may not lead me to the promised land of a decent pad and reliable water supply. I’ve got a Plan B at the back of my mind, much as I may not have a commensurate budget. A guy has to dream.

And so off I head to Kilimani, that estate that headlines the gazeti for its nightclubs and parties and because some flamboyant lad crossed the wrong guy in a pissing contest and paid with his life. I cut through Mimosa and call Nixon. You know that thing Nairobians say when you make an inquiry about something? I know a guy! So Nixon is one such guy, referred to me by my colleague who resides in The Radius, that expanse cordoned off by Ngong Road on one end and Waiyaki Way on the other. Nixon knows everything Kile, Lavi, and all their hidden fissures. I may just get lucky. I send Nixon the mandatory one thousand five hundred bob fee. I had left a G for Cathleen. Even merely scanning The Radius costs more. I persist in my pursuit of water.

I immediately know he knows his stuff. He is speaking my love language.

That afternoon, Nixon was driving a client around Lavington. The said client had only one ask, they wanted to move to a place with a borehole after experiencing dry taps at their current address. It doesn’t matter whether the place is smaller, it just has to have a borehole. It is that serious. Nixon has quickly learnt that to be a good housing agent in today’s Nairobi is not to know where the real estate steals are, but to know kama nyumba iko na borehole.

Borehole Up or You’re Doomed

Take for instance Kilimani. Known for its often swanky high-rise buildings with exorbitant rents (rent here starts from Ksh 25,000 for a studio apartment and up to Ksh 100k for a 2 bedroom). And so one would imagine that such costly habitats come complete with an abundance of water, but that’s not the case in this Nairobi.

And so whether in Kilimani or elsewhere, it is commonplace to encounter water bowsers. In Kilimani especially, they pass every hour or so whichever direction you look. Each delivery costs an average Ksh 2500, with an average family-occupied residential unit consuming a minimum of two bowsers a week. That’s Ksh 5,000 a week , roughly Ksh 20,000 a month. That’s more than the rent of a one-bedroom in Highrise Estate.

When I first moved to Pipeline, I was paying Ksh 8,500 rent for a standard one bedroom. In Kilimani, I’d have to quadruple that amount just to get a studio apartment. Yet, when it comes to the water shortage, they are two peas in a pod. The Kilimani that exists in popular imagination today is a Pipeline wearing Balenciaga boots. It would be hilarious if it weren’t so tragic.

Nairobi is growing at an extremely fast rate. As I wrote in an anatomy of a a city as a construction site, Nairobi has always been in a hurry to finish its mega construction projects—a city under the constant weight of a hammer, drilling trucks and blaring machetes—all reflect a spur of growth which has come at a cost, a victim of its own success. But things weren’t always like this.

In 1990, more than 90 percent of the population in Kenya’s urban areas had access to clean water, according to the United Nations. But times have changed. Over the last century, what started out as a colonial railway depot has morphed into a 4 million metropolis, bringing with it water shortage among other urban planning nightmares.

But this is not unique to Nairobi.

Two years ago, Cape Town faced becoming the first major city in the world to run out of drinkable water as it dealt with serious water scarcity. Between 2015 and 2018, a decline in rainfall resulted in Cape Town’s worst droughts on record. It was only a matter of time before Cape Town descended to ‘Day Zero’, when the municipality would have to shut off its water supply. Thankfully, through a raft of measures, the situation was mitigated.

Does the same fate await Nairobi?

On 26 December 2016, the Nairobi City Water and Sewerage Company Ltd first announced “temporary” reduction of water supply, and the situation has only gotten worse. According to a recent report, 60 percent of Nairobi’s residents do not have access to a reliable source of clean water. Prolonged periods of drought between its rainy seasons have also forced the government-run Nairobi Water Company to put in place a system of rationing since 2017. At most, residents get three days of water per week, collecting it in jerry cans and other containers to last them until their next supply.

Nairobi receives its water from four sources—Thika dam supplies 0.43 million cubic metres (m3) a day, Sasumua dam 52,800 m3, Ruiru dam 22,800 m3 and Kikuyu springs 4,000 m3. The Thika dam, which supplies over 80 percent of Nairobi’s water demand, is currently at 30-35 percent of its holding capacity. The city usually receives rain for seven months—March-June and October-December—but since 2016, it has been receiving rain for only two-three months. 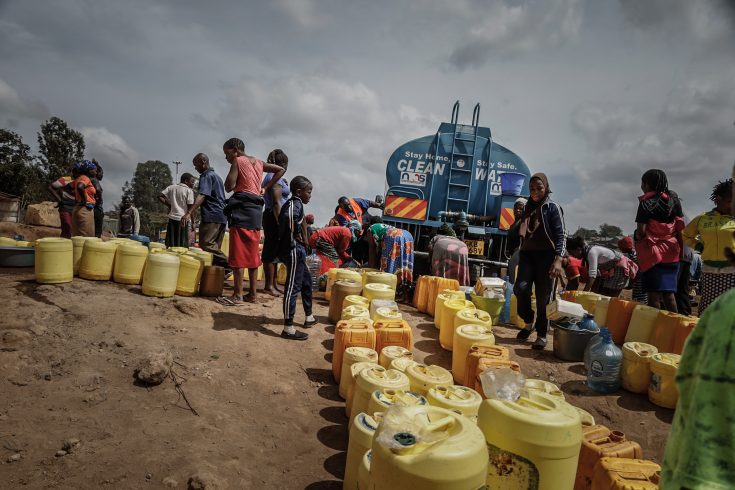 Nairobians filling up their water Jerrycans, during the shortage of water.  Photo by Donwilson Odhiambo / SOPA Images/Sipa USA).

While a high-end consumer in Nairobi uses an average of 200 to 300 litres of water per day, a slum-dweller consumes only 15 litres. With the shortage, residents have to pay KSh 20-40 for 20 litres of water which is 10 times costlier than the piped supply.

The Boreholes That Won’t Borehole

According to the Water Resources Management Authority (WARMA), Kenya has 5,541 boreholes. Embarrassingly, 60 percent of these boreholes no longer work due to a variety of reasons including lack of capacity by communities to maintain them or pay for fuel to power water pumps. In Nairobi County, there are more than three thousand registered boreholes as per WARMA. Embakasi, Kyuna, Karen, Loresho, Muthaiga, Upper Parklands, Langata and Spring Valley have the highest number of boreholes in the county. But in a January 2018 investigation, 40 percent of water cartels in Nairobi do not own any borehole but divert NCWSC pipes to fill their tankers and sell water at their own price.

According to Simba Drilling, the cost of drilling a borehole in Kenya depends on many factors among them the geographical location. The main factor in determining the cost of drilling the borehole is the depth (how deep does it have to be). It also depends on the equipment needs. Hydro-Geological Survey is between Ksh 50,000/- to Ksh 80,000. This gives you depth of drilling, formation of soil, quality and expected water yield and is a requirement by WRMA for permit. Thus, the average quotation for drilling a borehole can cost as low as Ksh 500,000 and as high as Ksh. 6 million.

However, there are growing concerns over the use of boreholes, with residents being warned over the long-term effects of borehole water. Seemingly, the city is stuck between the devil and the deep blue sea: while the water bodies cannot guarantee an uninterrupted supply of clean water, the boreholes residents are getting water from are in turn susceptible to long-term health risks.

My sojourn through Nairobi’s estates presents the same problem: one has to compromise on something. I am teetering at the edge, I have to find a house but I need a house with an uninterrupted water supply. Sounds like a pipe dream, all pun intended. Those with readily available borehole water rarely have spacious and/or pleasing houses, and those that look really good, well, there is a ‘Clean Water Truck’ parked in the basement, pumping water to the underground reservoir.

It is a catch-22 situation. Water has become the new gold, and boreholes the mines.

The Perils of Pandemic Travel