Leadership ≠ To Being Male

In 1933, a publication to contest ‘British’ Kenya’s state-backed papers which were written and published for European settlers was started. The Colonial Times, as the publication was called, was further designed as a solution to the press’s British-leaning one-sided points of view. The Colonial Times stood out as one of the publications under the Colonial Printing Works because of its dedication to factual perspectives of the ongoing Kenyan and Indian segregation in the colony. It’s motto? Free, Frank and Fearless.

The Role of Indian Migrants

The birth of the Colonial Times began with Shamdas Horra in 1900. Originally from British India, Shamdas was among the Indians contracted by the British to work in East Africa. The construction of the Kenya-Uganda railway had made significant progress and was set to be completed the following year. Stations had already been set up in different areas along the railroad and businesses were slowly but surely booming.

And so with a reasonable remuneration promised and housing for both him and his family, Shamdas packed his bags and together with his wife started the long journey across the Indian Ocean to the port of Mombasa. The couple was among 32,000 Indians who migrated to British East Africa between 1896 and 1901.

The railway line was the first of its kind in East Africa, and stretched approximately 600 miles from the port of Mombasa to the eastern side of Lake Victoria (Nam Lolwe as it was originally known by those on its Kenyan shores). Along its path, various towns had mushroomed. Shamdas took up the position of Station Master at the Athi River station, 280 miles from Mombasa.

One might have hoped (and perhaps Shamdas did) or assumed that working on a major project such as this would have its benefits, whether in the form of good housing or access to fertile lands that the region was known for, but that did not turn out to be the case.

The Settler as King

The economy of the colony was set up in such a way that it served white settler interests. The social order then and in the years that followed continued to largely favor Europeans; Indians were the low and middle class, restricted to working as shopkeepers or mid-ranking employees in the colonial public service. Africans on the other hand, while native to the land, were farmhands, forced to work for the white settlers with limited access to land ownership and restricted to racially segregated reserves, staying poor and oppressed.

Shamdas and his wife came to East Africa as newlyweds, and after growing roots in Kenya and starting a family, one of their sons, Girdhari Lal Vidyarthi, took an interest in news reporting and would later on become well known for founding an anti-colonial news agency.

In 1920, the colony was named Kenya and segregation was still prominent. By then, several Kenyans had been educated and the frustration of inequality continued to be a primary issue for most. Later in that decade, eager to write and share stories of the world around him, Girdhari Lal Vidyarthi started writing newspapers by hand. This project was born from dedicated reading, particularly the colonial publications that were easily accessible. He was drawn to the writing style, but disturbed by the biases. Something had to give.

A few years later, the handwritten newspaper grew into something more concrete. Vidyarthi founded the Colonial Printing Works, a print media house focused on publishing pro-Indian and pro-African independent newspapers. The Colonial Times newspapers openly supported the rights of Africans and continuously highlighted to its readers, who were mostly Indians, that Africans were being treated terribly.

The Colonial Printing Works produced a number of firsts. Aside from the Colonial Times, whose name was a pointed reminder of the reality people of Black and brown skins were living in, the media house published newspapers such as Habari za Dunia, Jicho and Ramogi, all catering to different groups. These newspapers were written in Kiswahili (Habari za Dunia and Jicho) and Luo (Ramogi).

The intent was to unveil white settlers’ claims on benignity towards Africans and Indians, and uncover the daily racism that Africans and Indians in Kenya faced. In this way, GL Vidyarthi was one of the Kenyan journalists who strived towards accuracy and fairness – key principles in news reporting.

The Journalism Bug Bites the Nephew

GL Vidyarthi’s work was no secret to his family, and his sons and nephews were often welcomed into his office, sometimes going to work with him. It was important that they too, despite their juvenility, would be aware of the happenings in the colony they lived in. One nephew who took a special interest in The Colonial Printing Works was Priya Ramrakha. He was the son of Ramrakha (who worked for the colonial government’s Public Works Department) and the grandson of Shamdas. 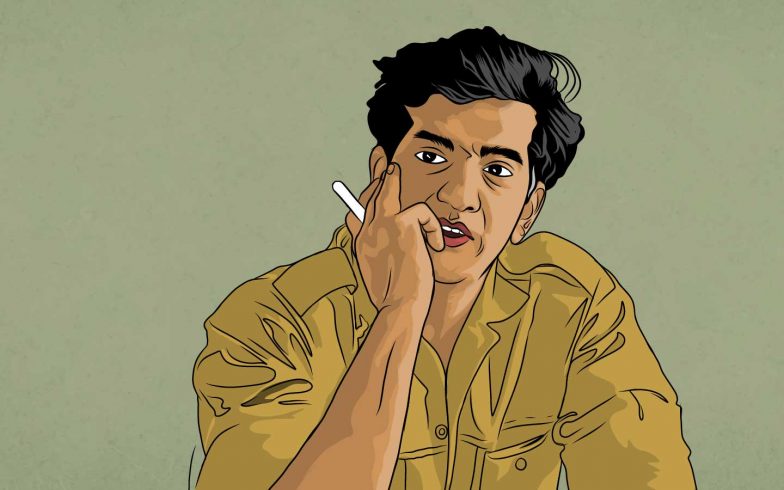 Priya was born two years after the Colonial Times started printing and from a young age, his interest lay more in the photos that accompanied news stories. When he entered his teenage years, Priya convinced his father to buy him a camera, and when he received a Rolliflex, it became part of him: he was never found without it. Priya, like his uncle GL Vidyarthi, let his interest guide him, and by the time he was in his late teens, Priya got his first job as a staff photographer for the Colonial Times.

Inspired by his uncle’s tireless efforts and the mission of the Colonial Times – Free, Frank, and Fearless, Priya’s photography slowly took on a political bent. His job required him to attend and photograph public events such as royal visits, but soon Priya was also at rallies for land rights and protests for political equality, positioning his camera and capturing moments that would be valued for years to come. It took bravery to be at the frontline of some of these gatherings where the outcome was unpredictable. For the less intense news locations, Priya observed and took it upon himself to photograph the race divide between Europeans and Africans.

The Journalist as a Guest of the State

The Colonial Times took the veil off colonial claims that British rule in Kenya was fair to all races living in the colony. The newspaper was largely diasporic, reporting on matters happening in both India and Kenya. GL Vidyarthi’s words weren’t limited to the Colonial Times; he contributed to other publications beyond Kenya.

In 1945, the colonial government arrested GL Vidyarthi for a story published in Burma Week that strongly suggested that the King’s African Rifles soldiers were guilty of crimes against humanity. It was a three-month sentence with hard labor. This punishment did little to dim GL Vidyarthi’s spirit, considering that upon his release, he continued with his work as both journalist and news editor.

The Colonial Times continued to gain momentum, and one of the notable outcomes of the publication’s demand for independence was a letter from British India in 1946, revealing various cruelties being inflicted on non-violent people in India. Publishing this expose resulted in another round of incarceration. GL Vidyarthi’s arrest made it clear that press freedom in the colony was non-existent to anti-British press.

However, what worked for The Colonial Times was its diverse team that ensured most of the articles were translated into different local languages, to be consumed by the paper’s growing audiences from different Kenyan communities.

It was perhaps only a matter of time before GL Vidyarthi took the next bold step in his publishing career, when he agreed to print pamphlets for the Kenya African Union (KAU) – a Kenyan political organization steadfast in achieving independence from British rule. The pamphlets communicated matters on land ownership by non-Europeans, higher wages for urban workers, and de-racialization of schools, to name but a few.

This and other efforts eventually culminated in complete independence, coming after India had attained self-rule.

While Vidyarthi edited and finetuned the words, Priya made a point to photograph the KAU meetings and the protests in Nairobi. But by printing and facilitating the distribution of KAU pamphlets, fate was inevitable for the media house. In October 1952, a State of Emergency was declared in Kenya, and several KAU members were arrested. The organization was banned for allegedly inciting rebellion. Vidyarthi was among the Kenyans arrested and transferred to the Kajiado Detention Centre.

Power of the Lens

Meanwhile, Priya was still going strong. He had started selling some of his non-controversial images to the British press while still working for the Colonial Times. The decision to make himself known as a photojournalist across different publications was a smart move, since when the Emergency was declared, Priya had access to the detention camps and different scenes throughout the Mau Mau Rebellion between 1952 and 1960.

And when the history of the Kenyan press is written, GL Vidyarthi and Priya Ramrakha will certainly not be part of the footnotes but feature prominently as patriots who defied the odds to give a voice to everyday Kenyans as well as to the pro-independence struggle. Through GL Vidyarthi and Priya Ramrakha, Kenyan’s rights became an international matter, all done through their deliberate words and pictures.

Why your Christmas is More Expensive This Year

Blokes, Here are Your 10 Best Shots at Dress Shoes