One of the most common and bothersome adjectives used to describe non-European football events is the word boring. Unsurprisingly, it was a word brought up during the build-up to the Africa Cup of Nations (AFCON), especially when the inevitability of the tournament became apparent. After being postponed in 2021 due to the ravaging COVID-19 pandemic, AFCON was given the go-ahead by the Confederation of African Football (CAF) despite pressure from the global football boss, Gianni Infantino, to either cancel or postpone the tournament.

The pandemic was conspiratorially a low-hanging fruit for sceptics – the not-so-thin-veil that everyone was hiding behind – but the real reason why non-African football honchos were pushing back on AFCON was because club managers in Europe didn’t want to let go of their African players. Yet, the European Championship, otherwise known as  Euros, the European tournament of equal significance and stature as the AFCON, was played across 11 countries (in a spreading the risk move) amid lockdowns and curfews in 2020.

Letting go of African players who ply their trade in Europe has been a perennial problem even before the advent of Covid-19, with European managers and media often downplaying the importance of the AFCON, also known as Cup of Nations on the continent. This time, Jurgen Klopp, Liverpool’s headman, was on the receiving end of a journalist’s backlash during a presser after he labelled AFCON “a little tournament.”

By no means am I or any other AFCON proponents deflating the dangers posed by Covid-19 since it remains a major concern to African players on the pitch, their coaches and indeed the battle-scarred host country, Cameroon. Cameroon, which was to host the tourney in 2019, had to relinquish the hosting rights to Egypt because of the Anglophone and Boko Haram crises in the country. The status of the football stadiums was also in question. That the stadiums were still incomplete in 2021 even after the rescheduling of the tournament signalled a worrying unpreparedness on Cameroon’s side. And it was not long before the Cameroonians were exposed. Eight fans died in a stampede during a match pitting Cameroon and Comoros.

Boasting of one of Africa’s longest-serving presidents, Monsieur Paul Biya, the Central African country pleasantly surprised many in December 2021 when it elected a new gaffer to lead its football federation, the global football icon Samuel Eto’o. Hitherto teased about its almost-president-for-life and his larger-than-life spouse Chantal, with Eto’o ascension to the helm of his country’s federation, Cameroon has since become the envy of other African countries whose federations are wallowing in unscrupulous sports and political leaders.

Undeniably, it is easy to judge Eto’o, AFCON’s all-time top scorer, because he is yet to truly reign. But if he is to be judged by how he has handled the tournament and the nascent months he has been in charge, Cameroon seems to be in good hands save for the criticism of the federation’s role in the death of the fans.

Meanwhile, countries such as Chad, Zimbabwe and Kenya have their football federations riding in all manner of turbulence. After failing to qualify for the Cup of Nations (partly blamed on endemic corruption in some instances), these federations have been disbanded by their national governments. Typically, this kind of state interference invites a ban from FIFA, the world football governing body, but only Chad received a ban, which has since been lifted and a normalisation committee installed by FIFA.

On its part, Zimbabwe’s presence in AFCON was precarious as the government had also disbanded their federation. Zambia was even on stand-by to play in the Cup of Nations, in case FIFA banned Zimbabwe. However, the football-mad country still graced the tournament amid suspension threats from FIFA. They have since been knocked out after a dismal performance in the group stage.

The same fate of government interference is plaguing Kenya. When the country’s Ministry of Sports took over Kandanda House, the offices where Football Kenya Federation are based, it seemed that there was nothing to lose should the country get banned by FIFA. Afterall, Harambee Stars, the men’s national team did not qualify for the AFCON or World Cup.

Now, almost three months since the Ministry of Sports established a caretaker committee, fans are grappling with the consequences of the coup. The women’s national team, Harambee Starlets are prematurely out of the Africa Women Cup of Nations (AWCON) and World Cup qualifiers. This is after CAF announced they received communication from the Football Kenya Federation saying that Kenya cannot host and attend any international matches because of the impasse with the government officials.

And so when the word boring is floated around regarding AFCON, I wonder what kind of content passes the vibe-check. For most fans, it is undoubtedly not the tactics that glue us to the screen, nor is it the match analysis by the pundits during half-time. It is also not the commentary that got a lot of criticism when the tournament kicked off. For we ourselves are pundits and commentators, and the most talking points come from the flair on and off the pitch. And in AFCON, both of these are served in plenty. Sometimes even, to dramatic extents like when a brawl ensued after Egypt knocked out Morocco at the quarter finals. 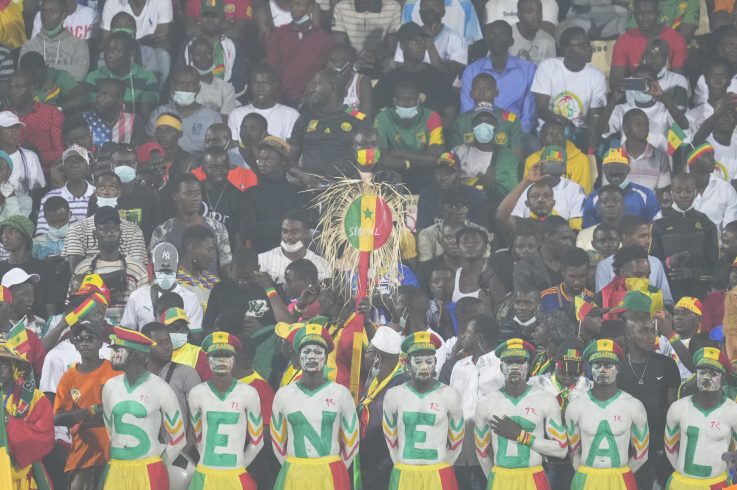 The flair off the pitch is brought by football fans whose faces are almost always painted the colours of their national team’s jersey. This is present even in Europe and other continents. But what is signature about Africa’s fans is the incorporation of music, dance, pomp and gaiety. However, this has been doused by COVID-19 restrictions with AFCON stadiums hosting only 60 percent of their capacities. It is little wonder that virtual fans were tweeting complaining about the lack of fans in the stadium. But whenever Cameroon was playing, the stadium cap was raised to 80 percent.

However, it wasn’t long before the referees stole the show. From controversial red cards and penalty calls, the cherry on the cake was when Janny Sikazwe, a referee , ended a game five minutes before stoppage time. Such was the drama in that game between Tunisia and Mali that it got the attention of the European media that dubbed the tournament boring. After the match in which Tunisia lost, the referee was on record saying that he ended the game because of a heat stroke.

Scouts often use international tournaments to hunt for young blood. But beyond that, these tourney’s are equally an avenue for local fans – Cameroonians and their neighbours in this instance – to marvel at global stars: Liverpool’s Sadio Mane and Mo Salah, Ajax’s Sebastian Haller, Manchester City’s Riyad Mahrez, superstars at home and away, are incentive enough for anyone to tune in, much as the talk-of-town Gabonese Pierre- Aymeric Aubameyang (who recently joined Spanish giants Barcelona) was missing in action.

In 1999, when Sir Alex Ferguson dramatically sealed a last-minute Champions League final win over Bayern Munich, he was famously quoted saying, “Football, bloody hell!” This must have been Nigeria’s reaction when they got knocked out by Tunisia in what stands out as the upset of the tournament. The Super Eagles, who looked poised to emerge at the top of the tournament, got knocked out by Tunisia at the round of 16.

And if it wasn’t Nigeria saying Football, Bloody Hell!, then the phrase must’ve become Tunisia’s after The Eagles of Carthage lost their subsequent match against The Stallions of Burkina Faso, a loss that sent them packing and cost their manager, Mondeher Kebair a job.

Certainly, there was plenty to entertain yourself with at the Cup of Nations and the politics around it, especially if you’ve got a sense of humour. The shenanigans with African football are not over yet as we still have the AFCON finals and the World Cup in Qatar in November this year.

When Mane stepped up to take the penalty, the execution was so powerful and precise that even Gabaski's dive and stretch could not reach it. Mane hit the football with the venom of a man ... 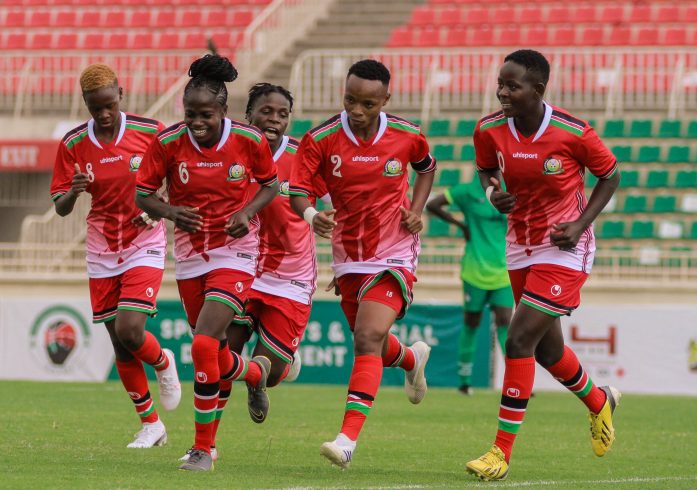 When Nick Mwendwa replaced Sam Nyamwea as president of the Football Kenya Federation (FKF) in February 2016, one of his promises was to elevate women’s football in the country. And in counting his administration’s achievements, ... 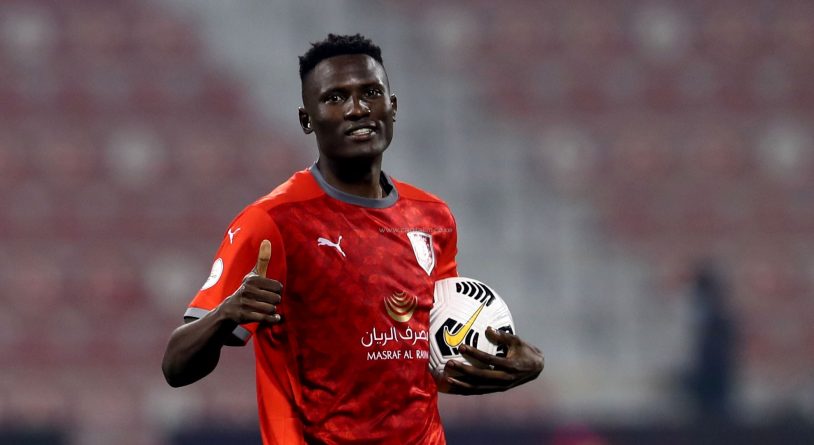 On 4 February 2021, Michael Ogada Olunga will be the second Kenyan to play at the FIFA World Club Cup.