Mama Patrick and her husband got the AstraZeneca COVID-19 vaccine at Mbagathi Hospital on 7 April. I caught up with her outside the facility moments after a failed attempt to get a jab because I was ineligible.

The centre had been offering the vaccine to the public days before, but the rules had changed.

Only frontline workers – medics, teachers, security personnel, the clergy – and persons aged over 58 were now getting the jab. No one was allowed into Mbagathi Hospital for the vaccine without proof of age or occupation.

Mama Patrick told me that they had arrived an hour earlier and been attended to in short order. Before receiving the jab, they’d had their personal details recorded on a huge black book at the registration desk.

Once registered and inoculated, the attending nurse informed the couple to report on 2 June for the final shot – eight weeks from the day. In the meantime, they were asked to await a text message from the Health Ministry confirming receipt of the first dose and its batch number.

“We were then stamped on our hands as a sign that we had been vaccinated,” said the woman as she stretched out her hand to show me a faint stamp on the back.

The couple was only half excited. The manual data system did not inspire confidence. The promise of a confirmatory message coming in on an unspecified date cast doubts about the process’s credibility. The verbal instruction of when to return for the second dose did not help either.

“Honestly, there’s no way to tell for sure if the next jab will happen,” Mama Patrick told me.

The vaccination drive was rolled out on 5 March, with the Health Ministry saying recipients’ data would be captured digitally in the Chanjo Information Management System. The electronic data management and reporting registry for the vaccine rollout was developed by the Ministry of ICT and Youth Affairs.

The Chanjo system is built to track and manage vaccination schedules, help in reporting and addressing any adverse effects from the vaccines. The information gathered is intended to assist policy making on an ongoing basis.

Access to gadgets and computers, internet connectivity and electricity access are pressing issues in marginalised and remote areas that should have been factored when setting up the system.

The result has been that facilities device their own ways of recording the data.

Kenyatta National Hospital (KNH) is a major vaccination centre in Nairobi. A security guard explained to me that vaccination at KNH runs from 7am to 2pm. Unlike Mbagathi’s manual record-keeping, KNH’s data handling is digital, pending the Health Ministry’s confirmation message for the second dose.

KNH is the largest hospital in Kenya, and was the centre where the national vaccination exercise was launched. The centre has the largest number of healthcare workers, and has, among other centres, received more vaccine recipients in the eligible groups than others.

At Vihiga County Referral Hospital, data is recorded by a clerk on a tablet and the nurse who administers the jab ticks off on their end. The recipient awaits a confirmation message once the process is done.

Priscillah Oweso, who manages health records at Vihiga County Referral Hospital shares that while having two data-collection gadgets at their vaccination centre has helped in real-time record management, lack of stable WiFi is an issue.

“We sometimes have to tether using our personal data bundles,” says Priscillah. Internet stability would go a long way in ensuring a smooth record-keeping process.

Julius, a farmer in Kirinyaga, says the county uses huge registration books at vaccination centres. After receiving the shot, Julius told me, he was issued with a vaccination card. A fortnight from the date of vaccination, the farmer had yet to receive the confirmatory text message from the Health Ministry. 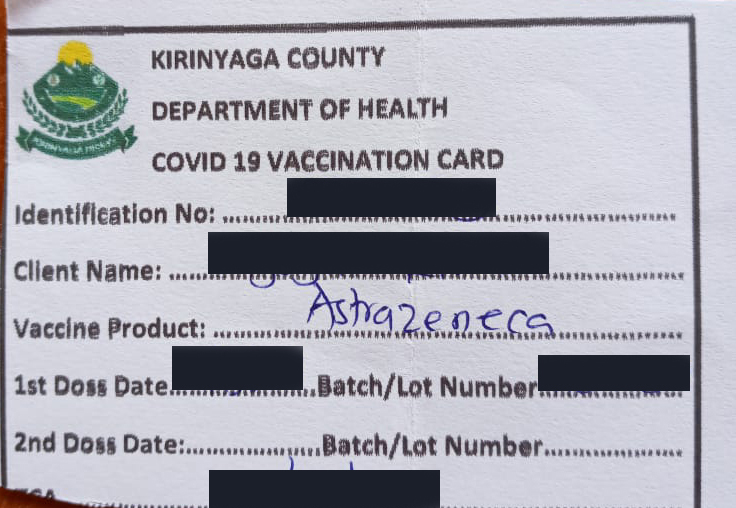 A vaccination card issued to a vaccine recipient from Kirinyaga County

Teacher Kilonzo* received his jab at Machakos Level 5 Hospital. Before the dose was administered, he was issued with a form to fill out his personal details at the registration desk. Like the Kirinyaga farmer, he was given a vaccination card upon receiving the jab. He received the confirmation message from the Health Ministry 23 days later. 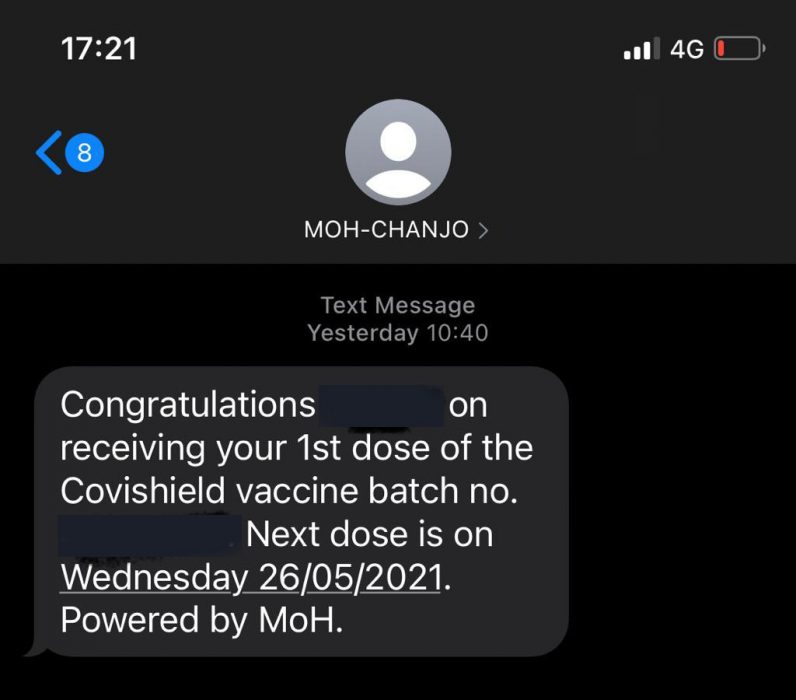 The fragmented data collection systems could be a problem in the long run. Retrieving manual data can be time-consuming, and at times, inconvenient when serving large crowds.

For citizens who did not receive a vaccination card and will not have received a confirmation message from the Health Ministry, digging into the huge black books to confirm they were vaccinated will be a major problem. If people were to lose their vaccination cards, they would suffer a similar fate. Without proper records, preparing vaccine passports, for people who might need it for travel will be a hassle.

A  study by the Yale School of Public Health and Harvard Medical School suggests that factors related to implementation such as pace of rollout and trust in the vaccine will contribute more to the success of vaccination programs than a vaccine’s efficacy. This rings true for Kenyans.

“We are endeavouring to vaccinate a million people; why are we opening vaccination centres at 9 am and closing them at 1 pm or 4 pm?” asks Thuranira.

Standing in long queues with little to no social distancing doesn’t make the situation any better. “You have only one vaccination centre in a facility that has 6,000 staff members – that’s already an epicentre for the spread of COVID-19,” he says.

By 20 April, 721,509 people had been vaccinated. That’s about 1% of the population. Kenya is expected to receive an additional 25 million AstraZeneca vaccine doses for the second phase of vaccination in June.

Vaccine outage in the various vaccination centres is being addressed. However, the Health Ministry needs to rethink the strategies deployed in the first phase before moving on to the next. Stakes are high. Vaccinating in multitudes is key to flattening the curve.