On 4 March 2021, residents of Matungu and Kabuchai constituencies went to the polls to elect their Members of Parliament. Armed with their voters cards, they walked to the polling stations with an assurance that the Constitution of Kenya 2010 vouchsafes a free and fair election. But alas! The new broom which was expected to sweep away the culture of electoral lawlessness has been rendered powerless and the ghosts of electoral violence and fraud continue to stand on the path of free and fair elections. The residents of Kabuchai and Matungu were met with today’s democracy’s saboteurs, willing to skirt the constitutional process, by all means, necessary so as to realise their ends.

In Kenya today, blatant non-compliance with the electoral law is now a recognised norm in the homestead. That the elements within the state will try and compromise by-elections – like what was witnessed in Juja constituency – does not surprise many. That members of the police service may be used to do the one side’s bidding during by-elections has become the norm rather than the exception. Candidates, too, resort to voter bribery.

Indeed, what the Matungu and Kabuchai (and others) purported by-elections showed us was that we can have ‘by-elections’ that do not meet the threshold to be called free and fair elections. An election must reflect and ascertain the true will of the people, and whenever elections are prevented from reflecting the true will of the people through violence, intimidation and bribery, then they do not deserve to be termed as elections. It is for these reasons that the Supreme Court of Kenya overturned the 2017 presidential election. As per the Court, the Law requires an election to be a true reflection of the will of the people, and such an election must be free and fair in the truest definition of the word.

Principles of a free and fair election

Article 38 of the Constitution of Kenya 2010 provides that every citizen has the right to free, fair and regular elections based on universal suffrage and the free expression of the will of the electors. Article 81(e) on the other hand provides for the principles of free and fair elections, which are:

Going by a historical detour of our Country, these constitutional electoral principles were not included there as mere ornamental or lofty aspirations. They were meant to safeguard the right to vote and prevent Kenya from sliding back to the unwanted past.  Secondly, these principles must be seen as one of the ways of safeguarding the sovereignty of the people.

Article 1 of the Constitution provides that the sovereign power belongs to the people and that THE PEOPLE may exercise their sovereign power either directly or through their democratically elected representatives. The import of this provision is that the representatives must be democratically elected. This is the sole reason as to why an election or by-election is a critical component of the life of every Kenyan.

And so when an election does not reflect the will of the people, it, therefore, violates Article 1 of the Constitution and the person declared as the winner will be exercising sovereign power that has not been granted to him properly.

Why the foregoing by-elections missed the mark 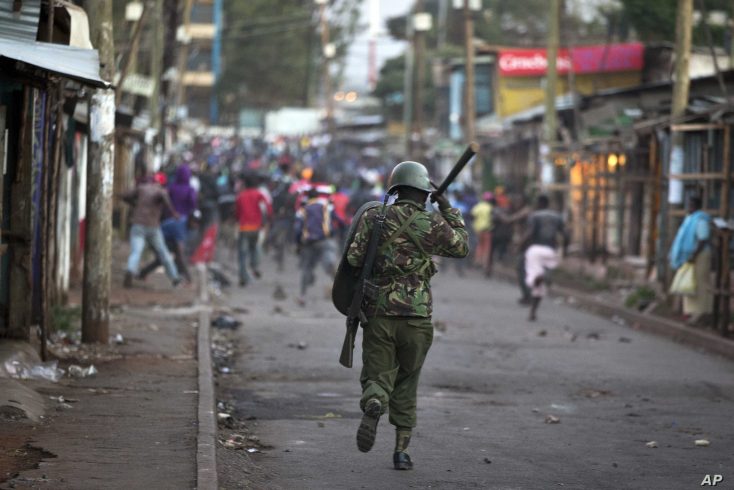 A GSU officer controlling a crowd in Kenya. Image Source: Voice of America

The role of the police during elections is to safeguard the right to vote by providing security to voters and guarding ballots. History has however shown that the police are occasionally misused to either interfere with or prevent voters from voting.

During the President Daniel arap Moi era, the police and provincial administration were used by the ruling party to deliver votes to the regime’s candidates. Today, in every election, the elements of the ruling party have been shown to make similar attempts, as they deploy dozens of police officers to polling stations, which then become scenes of chaos.

What these events show is that when they take sides, the police interfere with the existence of an environment that is free of intimidation, thereby undermining the people’s free will, sabotaging impartiality, neutrality, reminding us of the negative historical role that the police and the provincial administration played in the ‘90s.

It is for this reason that Section 12 of the Election Offences Act makes it an offence to use a public officer or the national security organs to induce or compel any person to support a particular candidate or political party commits.

Whereas the deployment of police is necessary, it should adhere to the UN’s caution that ‘‘in every case, any police presence at places of registration or polling should be discreet, professional and disciplined. In general, this requires that police and security personnel be posted in the minimum number necessary to ensure security in a given location. They should never be positioned in such a way as to impede legitimate access, intimidate voters or discourage them from participating’’

When the polls opened in Matungu and Kabuchai, social media was awash with videos and photos of Members of Parliament trying to bribe residents. Similarly, there were videos and photos of groups of youths wielding crude weapons, chasing voters away from polling stations. There was also a video from Matungu where a sitting senator was frog-marching a female employee of the Independent Electoral and Boundaries Commission (IEBC). In yet another video from Matungu, a former Cabinet Secretary is seen slapping yet another IEBC official.

These events and many others are contrary to the constitutional principles of a free and fair election. The Constitution prohibits violence in order to ensure that this important democratic process is not undermined. Put differently, when promulgating the Constitution of Kenya 2010, Kenyans had in mind of our peculiar history of botched elections, most memorably the 2007/2008 postelection violence.

Therefore any form of violence either by the police or by civilians undermines the authority of the Constitution and the will of the people. When Rtd. Col. Dr. Kiiza Besigye of Uganda challenged President Yoweri Kaguta Museveni’s election before Uganda’s apex Court, he stated that “the entire election process should have an atmosphere free of intimidation, bribery, violence, coercion or anything intended to subvert the will of the people.”

This is the same gift Kenyans gave themselves through the Constitution of Kenya 2010, which was supposed to make elections not an empty ritual but a meaningful expression of the people’s will. But as recent events have shown, the promise of a free and fair election remains a mirage, since what we commonly refer to as elections in Kenya today may not reflect the true will of the people due to violence, bribery and voter intimidation.

The Guy Who Went to Alliance

Justice Isaac Lenaola isn’t exactly your typical Alliance High School guy, the ones who never tire of reminding you that they went to Alliance. But be that as it may, Isaac Lenaola is still an ...

In 1990, for thirty days and on a diet of sugarless porridge, no blankets to shelter him from the cold and no access to a toilet, Justice Mohammed Khadhar Ibrahim—then a young advocate and partner ...

Before becoming a judge of the Supreme Court of Kenya in June 2012, Susanna Njoki Ndung’u was known for leaving an indelible mark during her stint as a nominated MP between 2002 to 2007. Much ...

If Institutional Memory Was A Person

Can one claim to be a fully formed judge if they lack the ability to throw a rib-cracking salvo or two during judicial proceedings? Maybe not. And so during the reading of the Supreme Court’s ...

What It Means To Be President-Elect

“Upon the declaration of the final results of a presidential election by the Commission under Article 138 of the Constitution and section 39 of the Elections Act (No. 24 of 2011), the Committee shall ensure ...