In many ways, Dr. Denis Mukwege’s upbringing chartered him on the path to where he is today. Growing up in a family where religion was paramount, as a young boy, Dr. Mukwege travelled alongside his father – a Pentecostal minister – to different homes in Bukavu (a city in the East of the Democratic Republic of Congo) to pray for the sick.

In his young eyes, there was so much power in prayer, in faith, and this made Denis want to be even more close to his father, who had taught the young man all he knew about the church, prayer and ministry. But as Denis grew older, he decided that the home visits and the prayers weren’t enough, and that there was room to do more to help people. And so he strived for excellence at school, with the intention of becoming a medical doctor.

His efforts weren’t in vain. Dr. Mukwege received an opportunity to study medicine in Bujumbura, at the University of Burundi. Once there, he maintained his studious nature, successfully graduating with a medical degree in 1983. Older and wiser, Denis recalled the promise he’d made to himself years before – to do more for the people, more than just pray and minister to them. This epiphany prompted him to return to Bukavu, where he got a job a little ways south of Bukavu, at Lemera Hospital, working as a paediatrician.

However, the thing about working in rural hospitals is that one will likely be roped into various health cases outside of their area of specialty, and Dr. Mukwege was no exception. At Lemera, he encountered several women with severe postnatal injuries that often left the women incontinent. Spurred by the memory of his decision to become a doctor, Dr. Mukwege decided to pursue further studies in medicine – focusing on gynaecology this time round. He enrolled at the University of Angers in France, returning home upon completion of his education to continue with his life’s work.

Unfortunately, by the time of his return from France, Lemera Hospital lay in ruins, following the start of the Second Congo War (1998 – 2003). And so the heartbroken doctor moved north, to his hometown of Bukavu, where he set up Panzi Hospital. 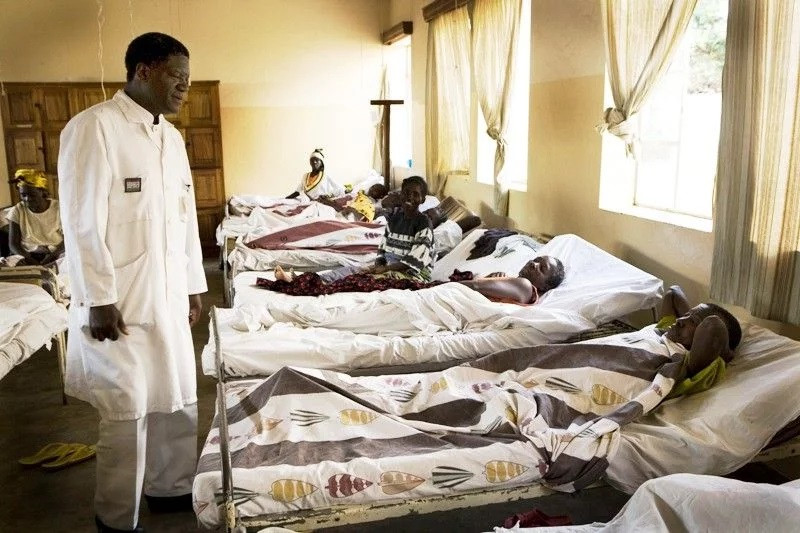 Dr Mukwege inside a ward of his Panzi Hospital in Bukavu, South Kivu, DR Congo

Dr. Mukwege’s initial goal was to set up a maternity wing, which came complete with surgical rooms. He was ready to attend to patients with postnatal complications. However, what Dr. Mukwege did not expect was to encounter victims of rape – in their numbers – among his patients. What was more devastating was the physical state in which the women came into the hospital – sometimes naked, often bleeding, with ripped genitalia while in extreme cases some had destroyed pelvises from gunshot wounds. Before long, 250 of the 350 beds at the medical facility were occupied by rape survivors.

At the time, Dr. Mukwege was the only gynaecologist in the entire province where he ran his practice. Considering how essential his interventions had become, coupled with his ever growing urge to serve those in need of urgent specialized medical attention, Dr. Mukwege ended up mastering reconstructive surgery, so as to have the expertise to offer treatment to female victims of sexual violence. It is this particular period in time that set off Dr. Mukwege’s journey towards becoming one of the world’s leading experts in reconstructive surgery. 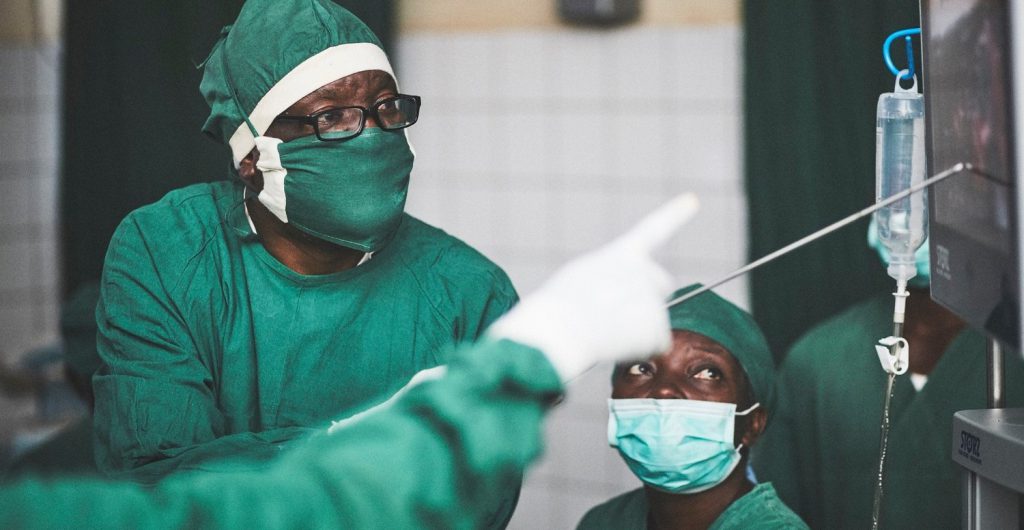 Dreadfully, it so happened that between 2005 and 2007, more than 20,000 women and girls in DRC were raped, meaning that despite Dr. Mukwege’s efforts, sexual violence was still a widely prevalent issue, a weapon of war.

As a way forward in mitigating against the rape and its devastation, in 2008, 9 years after Panzi Hospital was opened, the Panzi Foundation DRC was established to offer the hospital psycho-social support, legal aid, and socio-economic programmes. This establishment enabled the hospital to promote women’s rights, help survivors of sexual violence rebuild their lives, and advocate for the prevention of violence against women and children.

With time, Dr. Mukwege’s commendable work and dedication, though confined to the hospital, began to attract global recognition.

In 2009, he was awarded the UN Human Rights Prize. A few years later, in 2012, he was invited to speak at the United Nations, where he brought awareness to and rebuked sexual violence in the DRC. In his speech, Dr said: “Still today, many are subjected to sexual slavery; others are used as a weapon of war. Their organs are exposed to the most abhorrent ill-treatment. And this has been going on for 16 years! 16 years of errancy; 16 years of torture; 16 years of mutilation; 16 years of the destruction of women, the only vital Congolese resources; 16 years of destruction of an entire society.” In closing, the medic emphasized the need to confront the truth, announcing his hope for the DRC to overcome sexual violence.

A month later, there was an assassination attempt on Dr Mukwege at his residence back in the DRC. Having luckily escaped the hitmen’s wrath, Dr Mukwege was forced to flee and become exiled in Europe, only returning to the DRC in January 2013, ready to continue his work.

And as the work continued, the accolades too kept coming, as if to tell the doctor’s detractors they couldn’t stop the man’s noble work no matter what they resorted to.

In 2014, Dr Mukwege was awarded the Sakharov Prize for his dedication to the defense of human rights. Two years later, he received the Seoul Peace Prize. In 2015, he was honoured by an Honorary degree as a Doctor of Science from Harvard University, and in 2017 as a Doctor of Medicine from the University of Edinburgh. In 2018 for his tireless efforts and commitment to victims of sexual violence in his country, Dr. Denis was awarded the Nobel Peace Prize. 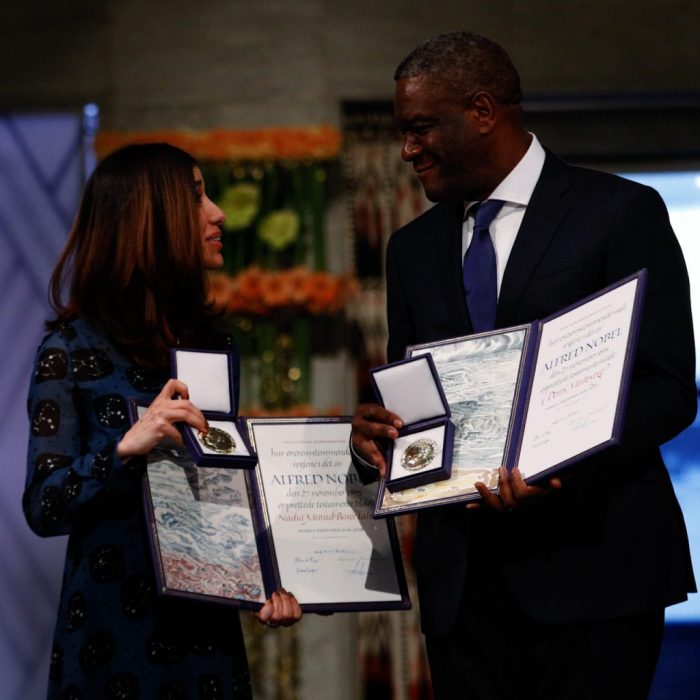 Yazidi activist Nadia Murad and Dr Mukwege. Dr Mukwege received the 2018 Nobel Peace Prize for his “efforts to end the use of sexual violence as a weapon of war and armed conflict

To stand firm as an aid and advocate for victims of sexual violence requires strength. Not too many people can be applauded for their consistency in this endeavour, but all through his career, Dr. Denis Mukwege has shown what an unwavering spirit looks like. For the work he has done, and the work he continues to do, his legacy will forever remain etched in history.

GL Vidyarthi and Priya Ramrakha: Pioneers of the Kenyan Press