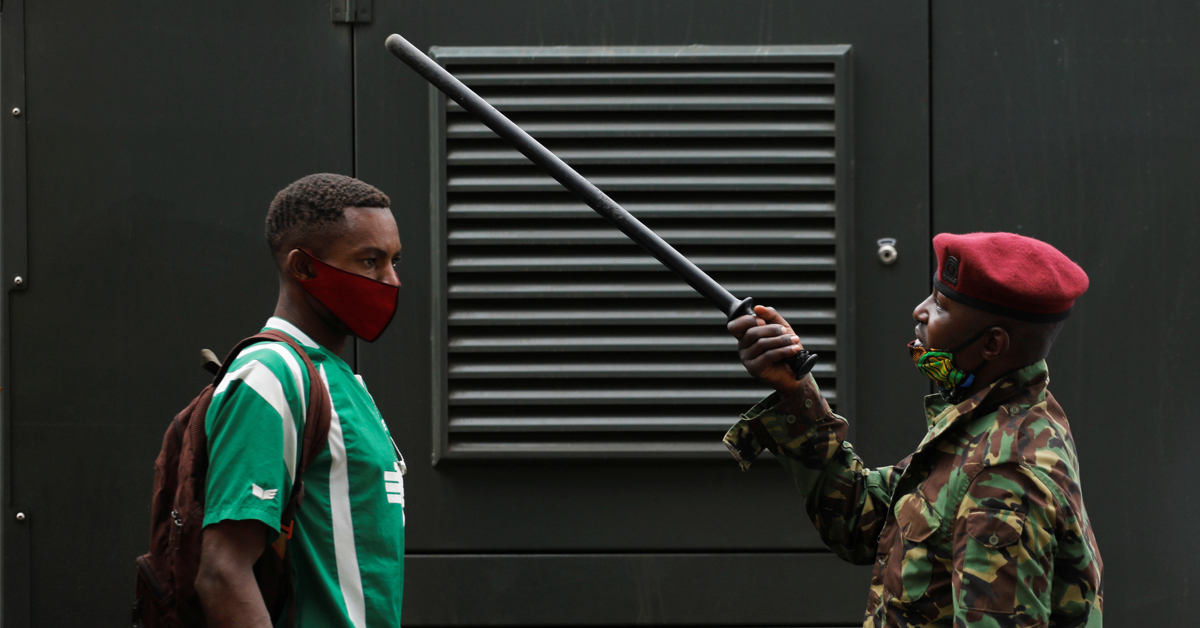 A police officer speaks with a man at a police checkpoint in Nairobi, Kenya May 7, 2020. REUTERS/Baz Ratne

Why The Curfew is Here To Stay

In his speech on 12 March 2021, President Uhuru Kenyatta conveyed that his government’s decision to extend the curfew is based on science and data. Wakini Njogu and Juliet Atellah dig deeper to make sense of Kenya’s COVID-19 numbers so far and what they portend for the present.

Isabella Akumu was in isolation for eight weeks. That’s what COVID-19 did to her.

How do six tests come back positive consecutively?

In July 2020, Isabella visited Aga Khan Hospital in Nanyuki with the worst flu-like symptoms and headache she’d ever experienced. The doctor on duty believed antibiotics and pain relievers would suffice. A week later, the symptoms worsened – splitting headache, accompanied by a loss of smell and taste.

“You must have COVID-19,” the doctor opined.

Isabella had to get tested. At the time, public health facilities were offering free Coronavirus tests. She took one right away.

“I’ll never forget how I got my test results,” she recounts.

On the morning of 23 July, Isabella received a call from an unknown number. The person on the other end of the line immediately started questioning where she lived and who she had been in contact with. The caller then proceeded to ask Isabella to pack a bag of essentials. An ambulance was on the way to come pick her up. Isabella knew she had tested positive without the caller uttering the words. Considering that Nanyuki is a small town, it didn’t take long before two men dressed in full Personal Protective Equipment (PPE) showed up at Isabella’s door and whisked her away to the waiting ambulance.

“Can you believe they fumigated my house seconds after I stepped out?” Isabella recalls.

She was driven off to an isolation facility, where the doctors finally confirmed to her that she had indeed tested positive. And so began the six-week isolation period. At the time, Isabella felt guilty for potentially putting her work colleagues at risk. Luckily, they all tested negative. The only way her parents could see her was through video calls.

“I won’t lie, I sank into depression,” she says.

Every test that Isabella took from that point onwards came back positive, prompting the doctors to add her more time in isolation. Six positive tests later, the doctor decided to send Isabella home to isolate for an additional two weeks. The depression persisted.

To Isabella’s pleasant surprise, the seventh test came back negative. But that did not mean she was out of the woods yet. Rejoining society became a challenge since there were evident patterns of seclusion by her colleagues for a couple of weeks, unknowingly stigmatising her.

Kenya confirmed its first case of Coronavirus on Friday, 13 March, two days after the World Health Organisation (WHO) had characterised it as a pandemic. Ivy Brenda Cherotich was the first confirmed case, having travelled from the United States earlier that month.

At the time, a total of 177 cases had been reported in Africa. The Kenyan government had prepared a 120-bed isolation centre at Mbagathi Hospital in readiness. President Uhuru Kenyatta addressed the nation for the first time on the COVID-19 matter two days later, banning travel from any countries that had reported Coronavirus cases.

Just weeks earlier, Ali Gire, an assistant security agent at the Jomo Kenyatta International Airport (JKIA), had filmed the arrival of a China Southern Airlines plane carrying 239 passengers from China. At the time, China was the epicentre of COVID-19, and very few cases had been reported in Africa.

Even after Ali raised concerns about the danger of open borders – information which leaked and caused public outcry – international flights were never disallowed at least for another month.

Majority of Kenyans were in panic mode. They obeyed all the mitigatory protocols from wearing masks to social distancing. As the number of confirmed cases progressed, President Kenyatta instituted more stringent measures, including a dusk-to-dawn curfew and cessation of movement in and out of Nairobi and the Coastal strip.

Of all African countries, Kenya had the largest number of measures, and law enforcement authorities took on the pandemic military style. Within the first 10 days of the curfew imposed on 27 March 2020, police killed at least six people, a number higher than those who had died of the virus at the time.

Kenya experienced a huge economic disruption almost instantly. Between April and June, an estimated 1.7 million Kenyans lost their jobs. Numerous companies either closed shop or cut down on their operations, and even the government announced a three-year hiring moratorium.

Night clubs were closed for half a year, leading to damaging (and almost irreparable) losses on the night-time economy. The tourism industry, for instance, reported a KES 110 billion loss between January and October 2020 as a result of most countries shutting down borders and fear of travel during the pandemic.

Luckily, as the international and inter-county borders reopened in July 2020 so did the job market. At least half a million Kenyans acquired jobs between July and September 2020.

In April 2020, the government started mass testing across the country. Private health facilities at the time were offering COVID-19 test at a cost of up to KES 15,000.

By July 2020, most government-sponsored facilities had stopped mass testing due to a lack of testing kits and reagents.

Towards the end of August 2020, Kenya started recording lows of 200 cases daily, and by 16 September 2020 only 92 cases were recorded. The number of daily deaths was always below ten throughout this period.

Majority of Kenyans came to the slippery conclusion that COVID-19 was exiting the country. Citizens became lax with the rules – planning and attending overcrowded social functions and absconding on facemasks.

Yet in actual sense, the number of COVID-19 tests were significantly lower than in previous days. If it wasn’t out of lack of kits, then it was the lack of reagent or lack of something.

As if to support the notion that the spread of the virus was diminishing, the President eased the curfew time from 9 pm-4 am to 11 pm-4 am. Additionally, bars were reopened, and the ban on the sale of alcohol in restaurants lifted.

Kenyans love to have a good time. After the bars reopened, people flocked to their watering holes in numbers on the daily. As observed, the drinking happened with masks and social distancing kept at bay.

Then the 2022 campaigns and the Building Bridges Initiative (BBI) commenced. Kenyans came out in thousands to cheer politicians. Masks and social distancing were alien.

By 1 November 2020, Kenya started recording an alarming daily confirmed cases of over 1000. This was the beginning of the second wave. President Kenyatta addressed the nation shortly thereafter, issuing a new ‘No Mask, No Service’ directive, closure of bars and restaurants by 9 pm, suspension of all political gatherings, and the curfew reduced from 11 pm to 10 pm.

According to the Center for Disease Control (CDC), the positivity rate is calculated by taking the number of positive tests divided by the total number of resulting reported tests, multiplied by 100%. The highest number of daily confirmed cases and deaths were recorded during this period; 1,554 and 26 respectively.

Since the pandemic broke, doctors and nurses heavily complained about the lack of PPE. In August 2020, health workers went on strike over poor working conditions and lack of PPE supplies and delayed pay.

Then all hell broke loose in September 2020.

Allegations emerged that the Kenya Medical Supply Authority (KEMSA) had misappropriated $7.8m meant to purchase PPEs for healthcare workers. Several procurement laws were flouted while awarding the tenders, such as granting a KES 1billion tender to a company that was barely three months old.

In a shocking revelation to the National Assembly’s Public Investments Committee (PIC) probing the expenditure of money in the purchase of the COVID-19 related equipment, James Njuguna who won a tender worth KES 180 million alleged that he was walking past KEMSA when he spotted a queue, curiously leading him in. He applied for a tender and in a matter of two hours, he was awarded. Investigations into the KEMSA scandal are still ongoing.

Kenyans have painfully watched as healthcare workers died in the line of work, with COVID-19 aid of over KES 194 billion funds meant for improving health facilities squandered with little to no action. This overt neglect of the healthcare workers has led to the death of at least 16 doctors and 34 nurses.

Notably, 28-year-old Dr Stephen Mogusu who succumbed to COVID-19 complications in December 2020 had not received his salary for 5 months.

It has been reported that healthcare workers who died in the line of duty are yet to be compensated by the government as promised.

The third wave of COVID-19 is looming, warns the health ministry and medical experts. The number of cases has been rising steadily for the past one month.

While most are asymptomatic, more complaints have emerged during this period of Kenyans suffering from flu and having headaches – symptoms resemblant to COVID-19’s.

A new strain has been reported with additional symptoms; aches and pains, sore throat, diarrhoea, conjunctivitis, a rash on the skin and discolouration of fingers and toes.

For most Kenyans, the cost of testing is out of pocket’s reach. Kenyatta National Hospital, for instance, is charging KES 4,000 for tests. Even so, many are going untested out of fear.

On 3 March 2020, Kenya received 1.2 million doses of the AstraZeneca vaccine, donated under the COVID-19 Vaccines Global Access (COVAX) facility. And even though the vaccination exercise has started, that does not put Kenyans’ minds at ease.

The government aims at vaccinating 1.25 million Kenyans in the first round, mainly frontline workers and the elderly population.

All students in primary, secondary and higher learning institutions resumed school in January this year. In as much as teachers are lined up to get the vaccine, it is the students who mingle in plenty.

The current trends are worrying – Kenyans are walking around without masks, and there’s hardly any social-distancing in matatus and other public spaces.

There’s an upcoming COVID-19 test at Isabella’s workplace, and she can barely contain her nervousness. Being a banker puts her at a high risk of contracting the virus.

One of the memorable losses that will forever be etched on the memory of most Kenyans is of Charles Bukeko, popularly known as Papa Shirandula, who died in July while waiting to receive treatment at Karen Hospital.

No matter the dynamics, mask up, sanitise and keep your distance.