War has ghastly long term effects on a nation’s economy, not forgetting the even more dire ramifications on a nation’s people, their lives and livelihoods – specifically when the country in question is one of low income – meaning longer recovery periods, if at all, for both the economy and the people.

For Somalia, the period between 1988 and 1991 was one of the darkest following the fall of President Siad Barre’s regime, a development that triggered a multifaceted decades’ long civil war.

Barre seized power in October 1969, emerging as the dominant one in a group of army generals who had staged a coup d’état. While showing early signs that his heart was in the right place as a potential stabilizing figure in Somalia, what followed was two decades of a dictatorship which included extreme brutality by the state on civilians, suppression of opposition groups and an increasing inter-clan conflict. By 1988, groups of dissatisfied and frustrated nationalists throughout the country attacked various government and military installations, setting off the First Somali Civil War.

What followed was massive bloodshed, extensive national division and a huge wave of displacement, causing masses of people to seek refuge in neighbouring states, including Kenya. By the dawn of the 2000s, there were a raft of peacebuilding efforts; but even then, and in the years that followed, Somalia couldn’t fully recover.

Violence was still eminent, and swathes of Somalis who had been victims of war displayed symptoms of Post Traumatic Stress Disorder (PTSD) – a delicate mental illness that most caregivers and communities weren’t sure how to deal with.

How the problem was handled…

There is a widely held belief in Somali culture that hyenas can see everything. This perception eventually extended to mental illness, and so it became widely believed that hyenas had the ability to see the ‘thing’ that causes mental illnesses.

According to Somali Psychiatrist, Dr. Abdirahaman Ali Awale, as a way to treat the affected, two hyenas were transported from the bushes and taken to hospitals in Mogadishu. Some psychiatry

patients admitted in these hospitals would pay up to Somali Sh700,000 (approx. KSH 133,000) to be locked in a room with one of the hyenas, hoping that whatever the root cause of the mental problem was, once it saw the hyena, it would drastically leave the patient, who would immediately be cured.

The story goes that for families on the move which could not afford this ‘treatment’, and who remained unsure of what to do with their kin suffering from mental illness, the easier way out was to tie the suspected patient to a tree when the families were migrating, leaving them for dead.

Moved by the unattended plight of his compatriots suffering from mental health and the attendant stigma, in 2005, Dr. Awale (then a psychiatric nurse in Somalia), pulled resources together to establish Somalia’s first psychiatric hospital.

Notably, Dr. Awale’s turning point came in November of that year when he witnessed a group of young girls being stigmatized for suffering from mental illness. Up until that moment, the good doctor hadn’t fully grasped the magnitude of the effects of mental health both on individuals and in communities. But the question that reverberated in Dr. Awale’s mind was… if such a brutal display of stigma had happened in public, what about the cases handled behind closed doors between caregivers and those suffering from mental illness?

The Habeeb Mental Hospital in Mogadishu thus opened its doors to those with mental illness and personality disorders, admitting approximately a total of 30 patients soon after. Of these, most were suffering from PTSD, and a number from depression. Dr. Awale had taken a small yet significant step towards resolving mental illness in his country, which had by then – according to a report by the General Assistance and Volunteers Organization (GAVO) – been thought to be the worst in Africa.

When Habeeb Hospital started treating psychiatric patients, there was awareness on the effectiveness of scientific methods in the treatment of mental illness. In fact, it soon became apparent that it was the only way to treat this previously taboo medical condition. 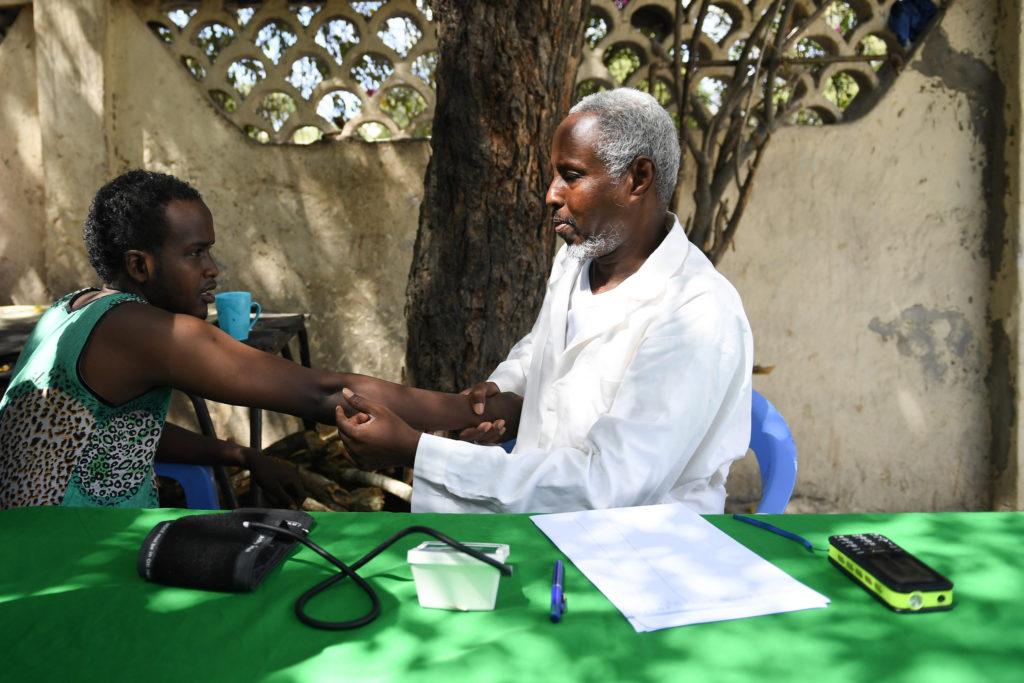 Dr. Habeeb attending to one of his patients in his clinic in Mogadishu/ Photo Credit: UNSOM

… and is being handled

Dr. Awale’s efforts didn’t stop at the setting up of the Hospital. He put in the work, studying to become a psychiatrist, and worked tirelessly to improve and expand mental health care across Somalia. With time, he became an advocate for mental health awareness, slowly multiplying his psychiatric facilities, ensuring they included outpatient services.

By 2016, Dr. Awale was running a total of six clinics across Somalia, where he provided free psychiatric treatment. And while PTSD was still a common diagnosis, Khat or miraa intake emerged as the other contributing factor in the high number of patients admitted into the clinics – affecting men between the ages of 18 and 30.

To date, more than 15,000 psychiatric patients have been treated in the six clinics.

The not so smooth sail

Yet in his 16 year tenure as a mental health advocate in Somalia, Dr. Awale has experienced expected difficulties that come with running a chain of medical institutions with limited monetary resources, this considering the fact that it takes a long time to treat most patients.

Nonetheless, Dr. Awale has pulled through, going above and beyond the clinics. He has since organized an impressive number of mental illness awareness campaigns for the general public, including by running outreach programmes in schools to educate the youth and demystify misconceptions that mental illnesses are more severe than most illnesses, and debunk the myth that psychiatric illnesses cannot be cured.

In 2016, Dr. Awale took his advocacy a notch higher by initiating awareness efforts through broadcasts on three radio stations in Mogadishu. The information on psychiatric illnesses was broadcast three times a day, with the main takeaway message being an advisory to the public to take people displaying outlined symptoms of mental illnesses to Habeb Hospital, where they were guaranteed to receive proper treatment at no cost of their own.

While working in a mental hospital can be tiresome and often takes its toll on him, Dr. Awale hasn’t shown any signs of slowing down as a champion for better, accessible and affordable mental health treatment for all in Somalia.

In his words, “mental illness is a disease which can be cured.”